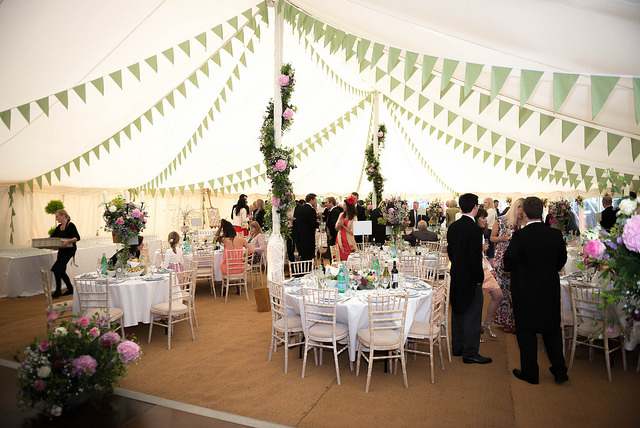 Tilford is one of the most picturesque villages, and this wedding was to follow suite.  It was a marquee wedding, with a dream team of services – Henry Wells as the official photographer, Gina Finbow Catering, some beautiful flower arrangements, and decoration of the marquee… and the mighty
Rollercoaster – 5 piece with keys and female vocalist in addition 😉

Speeches were done prior to entering the main venue, in a smaller marquee, which worked well due to the rain.  This also enabled the band to setup and run a small soundcheck.

First dance was ‘Dancing On The Ceiling’ (Lionel Richie), which was played by the band. The bride and groom had about 30 seconds on their own, then the entire dance floor filled… and it stayed that way for pretty well the whole night.  There were many highlights… it felt good to have played to a few of the guests (including the bride) around 6 years before at a 21st party.
There were certainly some high spirits – and a few stage invasions.  Huge thanks to the ushers and other folk who acted at part time security… ushering the very beautiful bridesmaids and friends from the wobbly stage.

We had a great time – the room had a fantastic energy, and Sophie and Nic are a lovely couple with a  great vibe!

Thanks for looking after us, best of luck in the future!