This was Rollercoasters first visit to the Savoy as a band (Chris the fiddle player had played here previously).  It doesn’t always follow that the finest venue in reputation is in fact the finest to play at, or visit as a supplier – however, there were no worries in this department.  From the moment we arrived, we were treated incredibly well, from the valet parking, to the constant supply of teas, coffees, Savoy biscuits and cakes.

When the guests arrived, the cocktail duo, Jason and Rob, played their unique blend of Gypsy jazz with a swing, which sat perfectly in the surroundings.  The band were setup in the main ballroom – the Lancaster Room – which has a slim stage, though it was ample for our needs.

After the last speech, we took to the stage, and played the first dance ‘Come Away With Me’ by Norah Jones, played by the band (with Holly singing lead vocals).  From there we went on into a Ceilidh section, led by Jason, who was handling the calling duties.

We pushed on into the evening, and the crowds filled the dance floor.  After a short break, we were joined by Eleanor Jennings (a guest) to sing till I Kissed Her… which was an absolute treat for the band and crowd alike – she has a stunning voice, perfect for the chosen song (which the band learned in the break).

By the end, the crowd were calling out for more, but we had to finish – and after some kind words from the father of the bride, we packed up.

The whole event was very much held together by Bruce Russell wedding planning.  Bruce and his whole team were incredibly helpful, and made us feel very welcome – they were a big help on the day.

Neil and Sinead are a lovely couple – they came to see us at Gomstock in the summer of 2013 with Neils parents.  Best of luck in the future – hopefully see you again soon at the next big family party! 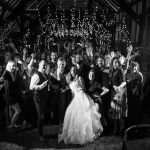 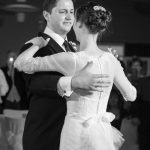