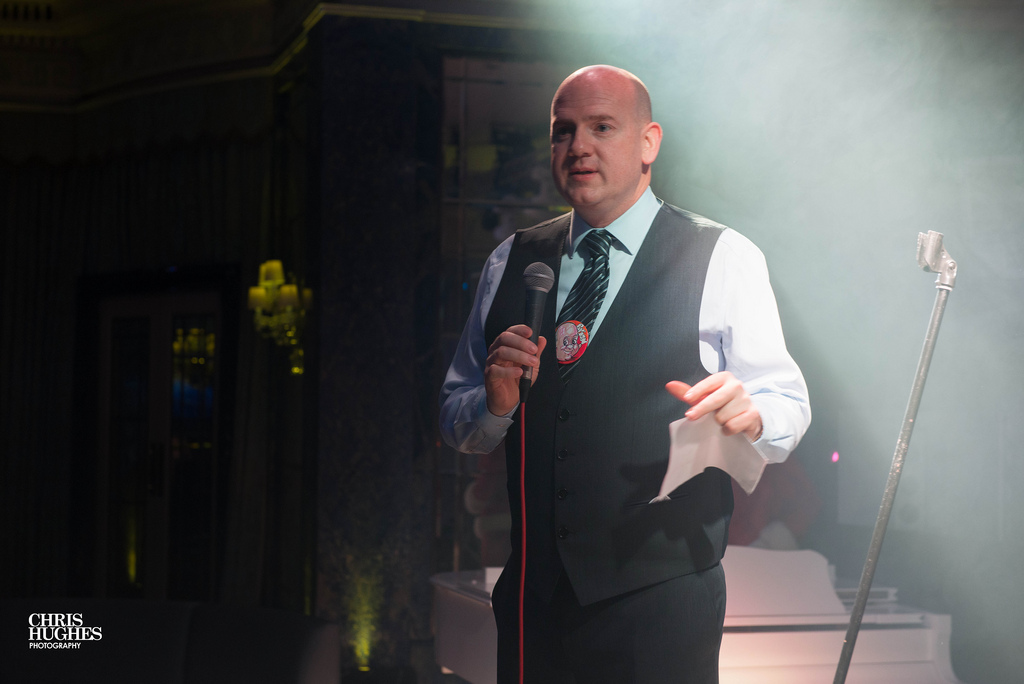 This was to be a unique gig in many ways.  For a start, itwas the last performance of 2013, which has been a great year for Rollercoaster.  The format would be the 6 piece band – Alistair, Rob, Chris,  Jason on fiddle, Chris Haigh on fiddle / mandolin, and Alex Keys on keyboards.  To top this, the Haigh / Blackham Rollercoaster guitar duo would be playing in the foyer for the drinks reception, and Alex would be playing the baby grand piano throughout the meal. Other attractions would be a visit from the real Father Christmas for the young folk, a ballon modeller, a caricuture artist, roulette tables, pool tables, a huge scalextric track, arcade video racing games, close up magician going from table to table, photo-booth, air-hockey table… and probably more that I missed.  To top that, after the meal, there was magic and comedy from compare / magician Paul Zenon, string quartet Siren playing their rocking live set, Bruce Airhead (seeing is believing… a guy who goes into a big ballon and does stuff – incredible, hard to describe)… and eventually… Rollercoaster!!!

So what could be better than that line up, in a fantastic venue, with an awesome sound system and simply stunning lighting setup?  Did we mention the family 18th birthday the night before in the same venue, where celebrity Radio 1 DJ Scott Mills came and tore up the dance floor with his banging’ tunes?

And to top it all, the each one of the band members families were invited to enjoy the celebrations as guests… Jason and Alistair’s wives and kids came along, and thoroughly enjoyed it.

The meal was stunning, with a full Christmas menu, and it was so special to be able to enjoy it with the family as well as other band members.  The entertainment was world class, and all that remained was for us to loosen our belts and hit the stage.  Due to timings moving later, we took just a 10 minute break and continued into the second set, playing One Day Like This (one of the client Brian’s favourite songs), for Anthony, whose 18th celebration it was the previous evening.  The Mumford songs shine when played in the 6 piece band, as we have the pianos, fiddle and mandolin to add to the mix.  Moving into the ‘rockier’ set, the party lifted, but it was with the traditional Irish tracks that the rest of the guests took to the dance floor.  Fairytale Of New York had everyone swaying, Irish Rover had everyone spinning, and 500 Miles had the remaining folk

singing, swaying, and dancing all in one.  The highlight for me (Alistair), was seeing my 4 and 6 year olds spinning and dancing with the very wonderful Father Christmas (huge thanks to this fellow – my kids are still talking about it).

In all, it was a perfect end to the year.  The venue was faultless, the staff were incredibly helpful, along with all of the folk involved with the event – flawless co-ordination from Jennifer at Planned 2 Perfection ( Home – Planned 2 Perfection ) who had the difficult job of pulling it all together, stunning lights and PA from Adam at Definition Group ( ‎definitiongroup.com/newsite/ )… and Chris at The Dorchester, who was a pleasure to deal with in the run up to the event.

The biggest thanks really go to Brian and his family.  Earlier this year we had played Brian’s father’s wake (Coombe Abbey, Coventry. ) – which was such a personal and special occasion to be included in (not forgetting a full set from Ireland’s finest – The Furies).  And at The Dorchester, for us to be able to include our families was a true show of Christmas spirit, and totally unexpected… and a perfect start to the festive holiday for us all ( I returned home to the start of the festive power cuts – 6 days without power over Christmas, which was part of the reason this blog took so long to update! ).

Thanks for looking after us, and a belated but heartfelt merry Christmas and a happy New Year…  See you all soon!