So years back, we played in the surrounding areas of Bristol, which led on to another gig, a wedding, a party, a wedding, a joint 40th party… and eventually to Graham’s Surprise 70th… which is pretty well how most gigs come about!  We had played at The Paintworks before – though outside at a corporate party for Co-Op / Sommerfeld.  Bristol is a very cool place for music, having spent many a week recording there, in the Massive Attack studios, a few years back now.  It’s a happening place, and it was great to soak up the atmosphere in the bar upstairs, whilst we waited for the meal to progress downstairs (Graham had been truly surprised at the party, which is a feat in itself, as anyone would know when trying to organise such an event).

The very wonderful event organiser, Marcus of Entertainment Industries, kept us informed over timings, until eventually it was time to start the music (it was a 5 course meal, with speeches, so it was a later start than usual).  We kicked off with one dance of Ceilidh – with Jason calling, Holly went out amongst the tables and pulled everyone up to dance.  It was actually a great way to get everyone up on their feet.  After that, we pushed on into the ‘best of’ set, with songs relevant for the crowd.  It was short but sweet, and was definitely suited to the event – giving everyone a chance to dance.

It was great to meet Graham after – he would happily have gone on clubbing, which is certainly the way to celebrate a 70th party 😉  Fast cars and late night bars…. with a large dose quality music!  Hopefully we’ll be seeing the family again – next time we’ll be able to push to longer sets… but for now, happy birthday Graham! 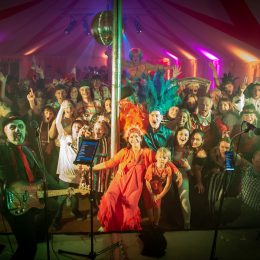 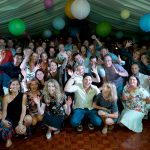