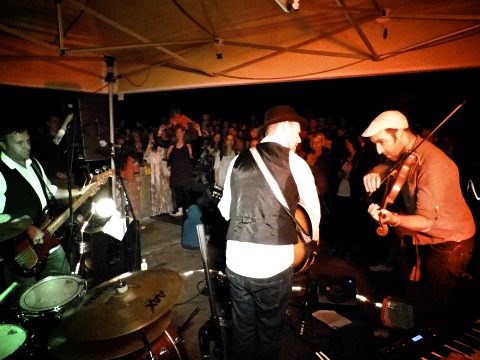 This was a rare public gig for Rollercoaster – but what a great one to do!  Rollercoaster guitarist Rob is one of the organisers for this event, so he was wearing 2 hats for the day, literally and figuratively! We had planned a 45 minute set – short but sweet… though in the end, due to various gremlins in the sound system, we ended up playing more like 30 minutes – shorter and even sweeter.  We had Jason on fiddle. and joining us on keyboards was Alex Keys… so nearly a full house (mandolin / fiddler Chris Haigh had a previous booking so couldn’t make it).

It was great meeting all the folk who had booked us for their weddings and parties – past and future.  It was one of the few occasions we could relax and chat after playing, as we are usually packing up and driving home in the small hours.  This time however, we stayed till late, then after closing, the band moved on to the ‘after-show’ at a ‘garden-pub’, hosted by Rob The Builder, where we danced, sang, played darts… and basically had a great time.  Around 4am, we crashed at various crash pads.  In the morning we re-convened, though in more of a sedate fashion, at The Tilings in Gomshall, where Al, Alex and Jason supped on the full English breakfast.

In all, it was great fun to play a no-pressure ‘public gig’ – just for the buzz (and to raise a heap of cash for the Surrey Air Ambulance).  Huge respect must go out to guitarist Rob, who sorted the whole thing out – Gomstock is a lovely event, in a perfect setting, beside the river in the Surrey Hills.  There was no Guilfest this year – but it’s spirit lived on, in part, on this hot summer night.  And long may it continue.

Thanks to all the people who came and supported, and thanks to the wonderful pub who provided one of their guest rooms… and of course thanks to Rob the Builder, who certainly CAN mix it… and to Al and Lyn who provided floors and beds for the remaining Rollercoaster folk who weren’t staying at the pub!

Photos were kindly provided by Jez Whatmore – thanks Jez!!