This was a last minute booking for the band (via the wonderful Gavin Thomas).  The location was Newlands Corner (behind the Manor Hotel where we had played the previous year).  The clients had built a fantastic stage for us – one that was solid enough for the mic stands NOT to bounce around as we moved around the stage.  We were under a large gazebo, on the stage one end of a large flat rectangular garden, enclosed by high hedges.  It was actually a great setting for a gig, with enough room for people to dance, or simply stay at the garden tables and enjoy.

After the BBQ (setup to the side of the stage) we push on into the first set, and the crowd enjoyed / ate / drank etc.  Second set was a more energetic show, for band and crowd alike – as the drinks continued to flow, and everyone loosened up.

It was great to play to such a welcoming and friendly bunch of people – we very much appreciated the steaks before the show (definitely kept us going)… and it was lovely to see the effort put into the stage.

Happy birthday Danny and Pete – hopefully see you all again some time! 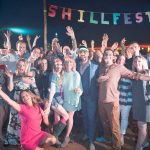 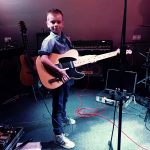