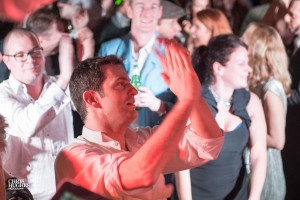 Rollercoaster played Headley Village Hall a few months ago ( https://www.rollercoasterband.co.uk/rollercoaster-case-study-3-a-village-hall-70s-themed-50th-birthday/ ), and here we were once again, setting up on the very fine

stage, overlooking a beautifully decorated room… though this time, it was to be Bond Themed!  The event was to be a fundraiser for the Action For AT charity ( http://actionforat.org ), who are an organisation who raise money “… fund medical research to speed up the process of identifying a cure for Ataxia Telangiectasia (A-T) or treatments that delay or prevent the disabling effects of this devastating childhood condition.  Watch the video at the end – and you’ll see it’s worthwhile!

MC for the night was the one and only Johnny Barran, who aside from being a presenter for 5 Live, is also the man behind  Johnny Barran Entertainment …. who put Rollercoaster into The Playboy Club (it’s one of his smaller gigs!).  With Johnny at the helm, the pudding auction

raised a whopping £2000.  A highlight had to be the Liddle cheese-board going for £200.  There were auctions, cocktails, top food, fancy dress prizes and some heartfelt speeches.

Soon it was time for the band to take to the stage.  It was a Bond theme, so we played Nobody Does It Better, then pushed on into the set.  We had about 1hour 45mins, so we pushed straight through… and the crowd didn’t stop dancing.  It was a joy to watch from the stage, as the most marvellous fancy dress outfits came on display – Johnny’s other half Helen, had gone for the gold sprayed Bond girl… and looked fantastic… as did the chap in the muscle suit with extra padding in various areas (I assume it was padding).  The great thing was, people had definitely put the effort in, and that enthusiasm spread onto the dance floor…. it was infectious!  We didn’t have much room to move around on stage, but we gave it all.  There were times, when it seems the whole room was bouncing up and down in time – with I’ve Got A Feeling, Wake Me Up, and Mr Brightside.  And before we knew it, the night came to a close.

It was a great show.  The guests raised around £10,000 in the one night – which is a huge achievement.  And for the band, it’s greatt we’ll be playing to most of these guys at the big annual ball, May 6th, again for Action for AT, at Old Thorns in Liphook…  which we’re really excited about – and honoured, considering where the proceeds are going.  It’ll be a great show to go to – checkout details at http://www.actionforatball.org and  the Facebook page.  Special mention to Susie who booked the band as a result of

us playing the Thursley playground fundraiser… and a big
thanks to all the Action For AT folk at Headley – incredibly welcoming, grateful… and basically up for a fun party!

(… and if you want to know why Action For AT is worthwhile, check the following video, and you’ll understand!)

and a few more pics…